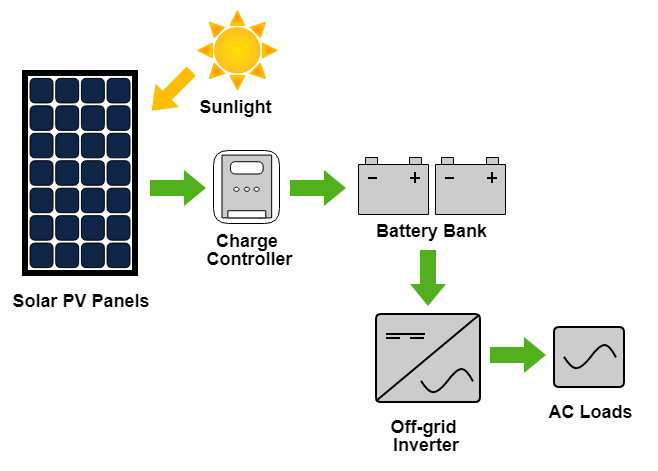 All About Off-grid Solar Systems

In this article, we’ll be taking a look at off-grid solar systems in great detail.

What is an off-grid system?

Off-grid living means “Living autonomously without reliance on a utility for power.”

“Not connected to or served by publicly or privately managed utilities” (such as electricity, gas, or water), as Merriam-Webster puts it.

So, off-grid means you’re not connected to the main electrical grid in your state or county.

So, how does one meet their electricity needs when living off the grid? Consider how much electrical power is used in practically every aspect of your everyday life, from having a shower in the morning to charging your iPhone overnight to warming water for breakfast cereal.

Let’s see what an off-grid solar system is all about next!

Without a direct connection to the utility grid, an off-grid solar system allows electricity to be harvested by solar panels and stored in a battery, providing an independent power source to your home or business.

Read This Next: The best ways to use solar water heaters

How does an off-grid system work?

The effectiveness of the components in an off-grid solar energy system determines its creativity. This is how the solar panels, charge controllers, battery bank, and inverters in a solar energy system work together to power your laptop or refrigerator.

Solar energy systems that are off the grid work by:

There are numerous benefits of off-grid solar systems. They promote independence because you no longer rely on your county or state for your electrical needs, it protects the environment and helps you save money.